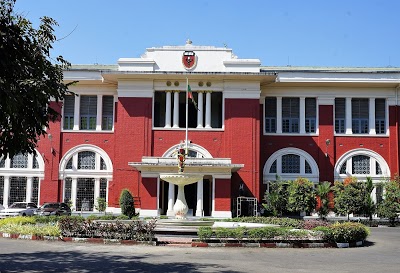 Teaching Physiology dates back to 1907 when formal medical education in western style was first introduced into Burma with a four-year Licentiate of Medical Practitioner course. In 1923, the MBBS course was opened and Physiology was taught in second year. The first Professor of Physiology was appointed in 1927.

In the early years, Physiology was taught by foreign professors. With the production of Myanmar graduates earning advanced degree in Physiology marked by Dr. U Mya Tu’s completion of PhD degree at the University of Edinburgh in 1956, Physiology teaching and learning has been steered by generations of Myanmar physiologists since 1959 in accordance with the changing approach to subject and needs of students and time.

Teaching of Histology and Organic Chemistry was transferred to Anatomy Department and Chemistry Department in April 1964 respectively. Biochemistry became a separate discipline in 1987. The duration of undergraduate Physiology teaching in the second year was reduce from previous two academic years to eighteen months in 1964 and then to one academic year in 1992. In accordance with the recommendation of the sixth medical education seminar, Physiology has been taught in first year for 3 months since 2004. Starting from (1/2013) second year intake, the duration of second year MBBS physiology course was extended again to one and half academic year and Physiology teaching has been taught only in second year.

The MMedSc course in Physiology was opened in 1971 with the production of 3 to 5 graduates per years. The MMedSc curriculum was revised and updated as necessary; a large scale comprehensive review was carried out in 2005, 2006, 2012 and 2017. The PhD course in Physiology was opened in 1997. Till now eleven PhD degree holders and 72 MMedSc degree holders were produced.